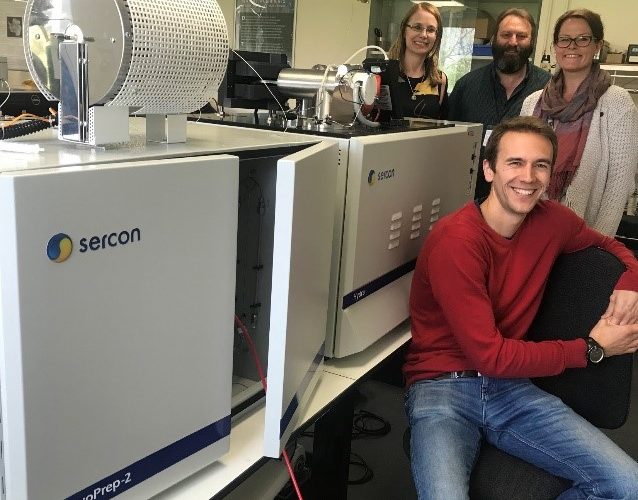 Tracking nitrate and ammonium in the environment

At the stable isotope facility at the British Geological Survey we are developing a suite of laboratory  methodologies to analyse key nitrogen bearing species (nitrate and ammonium). These methods will allow much lower concentration samples to analysed, helping improve our understanding of nitrogen cycling within the environment.

Nitrogen (N) alongside carbon (C) and phosphorus (P) is one of the key micronutrients critical to all life on earth. N is a core component in amino acids which in turn are the building blocks of all genetic material (DNA and RNA). N is the most abundant gas on earth making up 78% of the air we breathe. This atmospheric N is then is then converted by bacteria in the soil to ammonium (NH4+), in a process called nitrogen fixation, from here it is converted to nitrate (NO3–) and nitrite (NO2–), which can be taken up by plants, entering the food chain. In addition to natural nitrogen fixation, humans can also apply N rich fertilisers to soils in an attempt to reduce natural N limitation and promote crop productivity.

This application of fertilisers can however have negative consequences. When nutrient rich water runs off arable land and enters surface waters such as lakes and rivers, it can promote uncontrollable algal growth, drastically decreasing water quality, reducing oxygen content and leading to the death of other aquatic species. Additionally, high concentrations of N can enter groundwaters, from where it is almost impossible to remove, polluting aquifers traditionally used for water extraction and human consumption.

It is therefore critical that we understand how N enters our most precious environments, how it is cycled, transformed between different N species and how it is released back into the atmosphere. To understand these processes we need effective tracers, one of which is to look at the stable isotope composition of N within different key molecules including NO3– and NH4+. 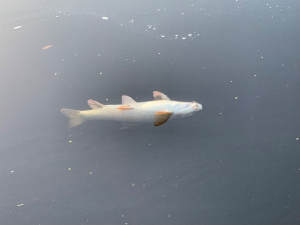 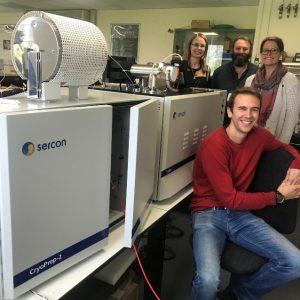 Excess nutrients such as N can cause significant problems with ecosystem health, including the growth of algae and the removal of dissolved oxygen in water which leads to fish deaths. © Andy Marriott (BGS) and Andi Smith (BGS).

The stable isotope facility has had methods for the stable isotope analysis of NO3– and NH4+ for many years. These methods have traditionally converted dissolved NO3– or NH4+ to a solid such as silver nitrate, allowing for the combustion of this solid within an elemental analyser coupled to a mass spectrometer. However, these methods required large volumes of sample water (>1 litre) and high concentrations of either NO3– or NH4+, this limited the types and numbers of samples we could realistically analyse.

Recently, we have been working to develop modern published methods. These methods are up to 1000 times more sensitive than our old procedures, meaning we can analyse much smaller volumes of sample (1-4ml) and at much lower concentrations (<1mg-l). Unlike our old methods these new ones convert the dissolved NO3– or NH4+ to a gas (N2O), which is then analysed by our trace gas and mass spectrometer system (Sercon Cryogas – HS2022). This new mode of analysis has needed much set up and testing over the past year, but we are now getting great data for low concentration N species.

The hope is that this faster, cheaper and more sensitive analysis will promote more wide-ranging N cycling studies using stable isotopes, helping to answer some of the key questions surrounding N pollution and sustainable fertilisation.

Thanks to the BGS innovation fund and Sercon for supporting this work.